The History of Phoenicia

The history of the Phoenicians, explorers and merchants, is little known. What a paradox for this ingenious people, who invented the alphabet, to have left so few written traces of their existence. Their literature, recorded on papyrus, has disappeared. And yet this civilization fired the imagination of its contemporarie—the Jews in particular—inspiring terror among the Romans and Greeks, who depicted them as a cruel people who practiced human sacrifice. Their clients were the pharaohs and the Assyrians, their ships criss-crossed the Mediterranean, laden with the luxuries of the day such as wine, oil, grain, and mineral ore. Buried beneath the modern cities of Lebanon, ancient Phoenicia is resuscitated in this volume.

Josette Elayi is a historian and researcher with degrees in Hebrew, Aramaic,and Akkadian, and an unrivaled expert on Phoenicia. She has taught at  the Lebanese University in Beirut and Mustansiriye University in Baghdad and currently continues her research in Paris at the Collège de France. She has developed a new pluridisciplinary historical method combining epigraphy, numismatics, archaeology, economics, and sociology. 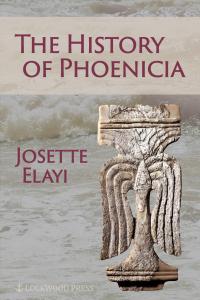