This volume presents the findings of three seasons of excavation in the 1980s at Kom el-Hisn, "the mound of the fortress," in the northwest Nile Delta. This provincial community was often in the orbit of Memphis, the capital and administrative center of Egypt's Old Kingdom period. Small areas of occupations of the First Intermediate and early Middle Kingdom periods were also excavated. One of the goals of the excavations was to complement and compare the substantial ancient textual record of this era with Kom el-Hisn's archaeological record because such evidence is sparse for Lower Egypt between about 2500 and 1800 BC. The findings presented here reveal the complexity of small Old Kingdom settlements in the context of the Memphite state organization and shed light on the changing relationships of this administrative center with its provincial communities. Kom el-Hisn's faunal, floral, lithic, and architectural remains are presented and discussed in detail, as are some theoretical and methodological issues relevant to this research. 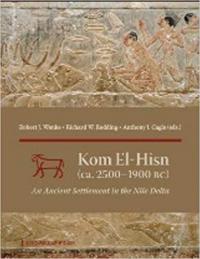