Current Research at Kültepe-Kanesh: An Interdisciplinary and Integrative Approach to Trade Networks, Internationalism, and Identity

The material remains and the more than 23,500 cuneiform tablets unearthed at the site of Kültepe (ancient Kanesh) shed light on social, political, and economic aspects of the Middle Bronze age (ca. 2000–1700 years BC) in central Anatolia, but also in upper Mesopotamia. The rich textual record provides ample information on a very sophisticated supraregional market economy, representing one of the best-documented historical cases of long-distance trade in the ancient world. Although the site was first excavated in 1893, followed by intermittent excavations between 1906 and 2005, modern scientific and interdisciplinary excavations have only been undertaken since 2006. The new scientific research at Kültepe-Kanesh has already begun amassing new data and providing us with a unique opportunity to generate new perspectives and to challenge previous models and assumptions about, for example, trade, colonialism, ethnicity, art, religious ideas, identity, and patterns of social, political, and economic organization in the Near East during the Middle Bronze Age. A primary goal of this special volume is to integrate the work of scholars in archaeology, archaeometry, bioarchaeology, geoarchaeology, and history to develop a new synthetic research paradigm for investigating issues of trade, colonialism, ethnicity, art, identity, and urbanization in the Near East in a unified fashion. 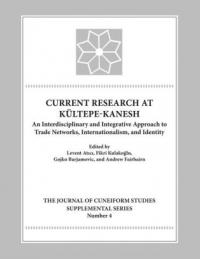